Klibur Domin is an 85 bed health care centre based at Tibar village, 15 km west of Dili, Timor-Leste. Klibur Domin was established in 2000 by Ryder-Cheshire Australia which has continued to partner with Klibur Domin over the past 20 years.

The Mission of Klibur Domin is to relieve suffering among Timorese people who are sick, disabled or destitute, without discrimination.

The Managing Director and Chief Executive Officer, Joaquim Soares, is Timorese, and all Klibur Domin programs are staffed by Timorese, including medical, nursing, therapy, personal support, cooking, cleaning, driving, administration, maintenance, gardening, livestock management and security.  Overall control rests with the Klibur Domin Board of Management, the directors of which are Timorese and Australian professionals.

The majority of funds required to operate Klibur Domin are sourced from Ryder-Cheshire Australia through individual sponsorships, donations and through fund raising by Ryder-Cheshire Foundations and other support groups.

Other money is provided by Ryder-Cheshire New Zealand, the Timor-Leste Ministry of Health (MOH), the Ministry of Social Solidarity and Inclusion (MSSI), the Global Fund (GF), the Korean International Cooperation Agency (KOICA), Australian, New Zealand and Japanese Embassies and occasionally by other international charities and organisations.

Rotary and other Service Clubs in Australia have provided a large amount of funding and equipment for projects at Klibur Domin since September 2000.

The Klibur Domin Board of Management was set up in 2001 with Dr Rui de Araujo as the Chairman.  At the time, Dr Rui was the Minister for Health in the Interim Timor-Leste Administration.  The Board’s role was to oversee the management and to exercise control of policy and the future direction of Klibur Domin. 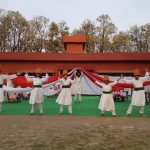