Anyone who can possibly make the effort to spend time in Timor Leste should jump at the opportunity. I enjoyed every day of my two months’ stay at Klibur Domin. As I have been retired for a few years I was worried that the long day from 8 am until 5 pm in the heat might prove too much for me. It turned out to be like a holiday on a tropical island away from the Ballarat winter. The warm weather and cool nights suited me though if I had to work in the sun it would have been a different story.

Most of my work was done on the computer. I helped Snr Soares to produce material in English and occasionally in Tetun. I went through a quick learning curve to produce Klibur Domin’s first English newsletter. Luckily I had been required to produce a newsletter in Australia a few months earlier and had been taught to use the program “Publisher”.

Tetun is a very easy language to learn. With a few greetings and some vocabulary and the English the staff already knew, I was able to communicate satisfactorily. Actually I enjoyed taking time each evening to learn a few more words and phrases in Tetun. Also teaching English to a few of the staff was fun and greatly helped me learn Tetun. I have left a set of notes for further volunteers to teach other staff members.

With a nutritious meal presented to me twice a day I had plenty of time for reading about Timor-Leste and learning Tetun. I recommend that any visitor to Timor-Leste read James Dunne’s account of the troubles in Timor Leste during the past half century.

One highlight was a Saturday trip with the Outreach staff. It took a rough three-hour ride to the village. The road took us close to the border with West Timor and if we had continued south we would have reached Balibo – the village of the murder of the western journalists. 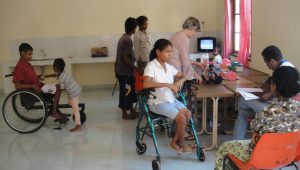 While at the village any villagers who wished to be tested for TB presented themselves. Also parents brought forward children they were worried about as they suspected some abnormality in their development either physical or mental. The staff then arranged to bring those requiring further treatment back to Kilbur Domin on a later trip. Next a crowd gathered and the staff educated the villagers about TB and Klibur Domin’s services. Before we left we were treated to a nutritious meal cooked by the women. (I noticed the women were last to eat and so only had rice and scraps to eat.)

One excitement of the two months was the elections and its aftermath. As Fretlin supporters were upset that their elected members were not being asked to be part of the Government there were riots in a small area of Dili. During this disturbance anyone who had the sense to keep away from the few streets where the troubles were, was perfectly safe.

Away from KD one highlight of the two months was the trip to the SW for the celebrations for opening of the Church in Suai. It was my only chance to see country outside Dili precincts. I saw magnificent scenery of mountains, valleys and rivers. As well as the sadder sights of village houses destroyed by Indonesian militia, and roads that were difficult to negotiate with 4-wheel drives, I had a great few days. On a more hopeful note there were also houses being rebuilt and roads and bridges being constructed. 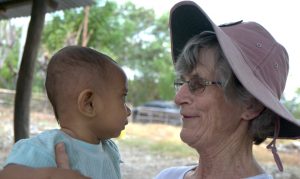 The church celebrations began a week earlier in the east of the Timor-Leste with a gathering of youth to begin a procession of a cross through the country to the new Church. Each night of its journey the cross was displayed in a church where the local youth had hymn-singing and prayers. The actual ceremony was attended by thousand of people including youth from all over the country and by dignitaries. Funds to build the church were largely donated by the Government as it was the site of a massacre of three priests and over 100 people in 1999 and so the church is a memorial to these martyrs.