THANK YOU to all the donors who contributed to our Flood Appeal, following the 6 April Cyclone and resultant major floods that hit mainly the central and northern side of Timor-Leste. A total of  AUD $43,500 was raised and NZD $10,000 that was immediately contributed by our “cousins” Ryder-Cheshire New Zealand. This is a fantastic effort!

Apart from some initial amounts of emergency support of food and materials provided by Klibur Domin, Managing Director, Joaquim Soares, and the KD team have nearly completed a list of priorities of what, where, who and how much is to be spent. Approximately $10,000 has and will go to around 22 families worst hit and most in need. This will include some staff.

Some funds will go to installing more flood mitigation on the top side of the KD compound. Joaquim is about to decide on final quotes from contractors to make and install gabion cages.

Although building damage was not severe, fortunately, there is one small old building that was affected. It was initially planned to keep and repair this building, but thanks to the total amount raised, there should be sufficient monies to replace that building with a new structure in a less flood prone spot. 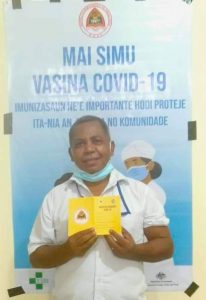 The virus situation has eased somewhat in recent weeks with 30-50 cases being reported per day, mostly in Dili, which is still locked down, as well as Bacau. However, life is pretty much back to normal in the municipalities. All KD staff now had their second shot so service has resumed with KD staff now able to go to Bacau and Viqueque to continue KD’s TB and CBR work. 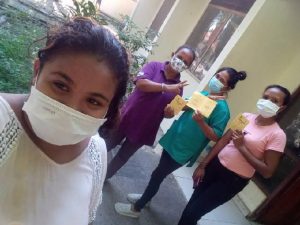 Of course the big concern is the possibility of the Delta variant taking hold. It is of note that Australian Government has donated several large doses of vaccine, to the extent that over 30% of the population has now had their first ‘jab’. Significant additional support has been provided by the Menzies and Doherty Institutes, and their whole control process is being led by KD Board member Dr Rui.

One very good piece of news is that two sets of playground equipment, one from Box Hill, Victoria and a small set from Mount Gambier, South Australia are due to be shipped to Timor-Leste in the next few weeks. These have been ‘harvested’ with assistance from local Rotary Clubs. Also to go into the container will be a large trampoline and shade sails which will go over much of play equipment.

Thank you very much to the KD Appeal donors, plus the individuals and groups who funded the trampoline and shade sails.