Josie and her Family at Raphael 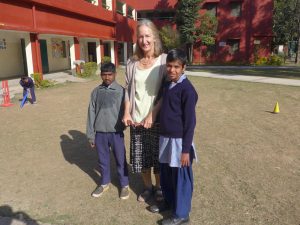 We went as a family to volunteer at Raphael (Ryder Cheshire Foundation) in Dehradun, India. It was Molly’s idea which then took hold.

Molly (20), was on summer holidays from university, Roland (17), had just finished school and did not wish to take a gap year but accepted this challenge; I was eligible for long service leave from Maternal and Child Health Nursing and Rick, a self-employed builder, could manage his time. As well as volunteering with special needs children and assisting with a humanitarian orgaisation, we hoped to experience India in a true and meaningful way.

As Raphael was closed for Christmas holidays, our month of volunteering there would start mid-January. So, we planned three weeks of travel and sight-seeing beforehand. It was winter time in India. Our journey started in Kolkata so that we could spend a few days with our old exchange student, Deeksha, and her family. They were wonderfully hospitable and introduced us to the food of West Bengal, took us to a wedding celebration and to New Year’s Eve events in Kolkata. It was a happy start to our holiday.

Then, we travelled by train across the country and north to Dehradun, stopping at some places of interest en route. The trains seemed to be plagued by long delays due to fog, the platforms were shockingly crowded, but once on board the journeys were comfortable enough. We stopped at Parasnath Hill for a 20 km hike up and down hill on a Jain pilgrimage. Then to Gaya and Bohdi Gaya along with many Buddhist pilgrims to see the place where the Buddha found enlightenment. Next stop was Varanasi on the Ganges, a holy city for Hindus and a very interesting place. Finally, we reached Agra with its amazing history and buildings in particular; the Taj Mahal and Agra Fort. We also visited a sloth bear sanctuary at Agra (SOS Wildlife, India) for rescued “dancing bears”, a cruel practice which is now prohibited. Finally, we had a short stay in Delhi before the last leg of the journey, six hours by train, to Dehradun.

Those three weeks of travelling were our introduction to India with its brightly coloured clothing and exotic styles of dress, spicy foods, stalls of luscious fruit and beautiful craftwork. We felt stunned by the crowds; the honking, chaotic, nightmarish traffic, fog and air pollution, delayed trains, beggars, poverty, rubbish and requests for selfies. Despite great care, we were all sick at various times. 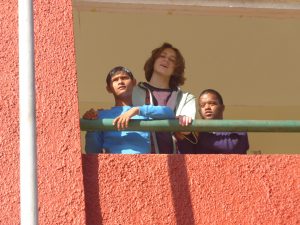 Feeling a little dazed and amazed, we arrived safely at Dehradun. Raphael seemed like a green oasis at the edge of town, merging into the forest. I liked the space and the old colonial style buildings. We were warmly welcomed and we quickly felt part of the scene. Though what a strange coincidence to travel so far and to find that the other volunteer there, Kim, was from our home town of Ballarat!! Three weeks later, two young men from England on their gap year joined us to swell the number of volunteers to seven. 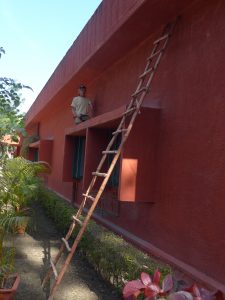 There is a very positive air and a sense of community spirit about Raphael. We felt accepted as part of a large family and quite at home with all the new people we met. Our volunteer work was mainly Monday to Friday 9am to 3pm and we could choose our area of work. I enjoyed spending time at physiotherapy and the workshops but mostly worked with a class of 10 to 14 year olds. Molly and I were lucky to go out for a day with the Community Based Programme (CBP), visiting schools and a few homes with a physiotherapist and a specialist educator. Molly worked in a class with high needs children of primary school age and Roland assisted with 12 to 18 year olds and in the office. Rick offered to do repair work and word spread quickly, so that he was kept busy fixing broken chairs, tables, doors and taps. He ended up painting one of the buildings and became familiar with the local hardware shops. 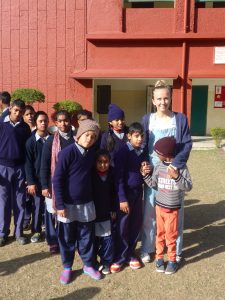 The day started with breakfast at 8am. Three delicious meals were served up for us daily by Hari, the cook. At 9am, the children and staff gathered in the playground for assembly. Their singing was beautiful and the national anthem, sung so lustily, with hand on heart, was very moving. My favourite part of the day was the supervised walk around the grounds before lessons. There seemed to be few language barriers, perhaps because many of the children could not speak or had only a few words and were used to communcating non-verbally. They were delightful company. The disabilities of the children were mostly cerebral palsy, autism, Down syndrome, microcephaly and deafness. Most of the children are from poor families and have few possessions, but seemed entirely satisfied with their lot. They could teach us all a lesson in living in the present, in the joy of life and in gratitude for simple things. It was rather humbling.

After school we often wandered into town to explore and have a cup of chai. There were places of interest and beauty to visit at weekends: Moussourie, a hill station in the foothills of the Himalayas; Rishikesh on the Ganges, made famous by the Beatles in the 1960s; Rajaji Tiger Reserve and Haridwar, a town of Hindu pilgrimage. Our month at Raphael came to an end too quickly.

Would I recommend volunteering as a family at Raphael? For the right individuals, I would say definitely, yes. If you can cope with India, which I feel is more confronting than many other developing countries. Raphael is the safe haven. Travel broadens the mind and is an education in itself. We have come home with many shared experiences and funny memories. Volunteering involves being willing to give your time and energy, being adaptable, expecting nothing in return and coming away feeling enriched. We would like to thank Ryder-Cheshire Australia for this great opportunity and for all the wonderful work that goes on at Raphael.
Josie Calvert.