For Valour – an account of Leonard Cheshire’s wartime experiences 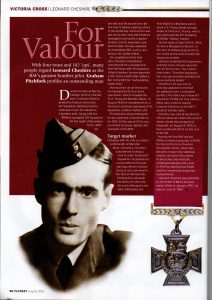 The Ryder Cheshire Foundation was founded by Sue Ryder and Leonard Cheshire.  This article about Leonard’s wartime experience is reprinted with kind permission of the editor of the magazine 90 Flypast August 2016.

With four tours and 102 ‘ops’, many people regard Leonard Cheshire as the RAF’s greatest bomber pilot. Graham Pitchfork profiles an outstanding man.

During his time at Merton College, Oxford. Chester born Leonard Cheshire joined the famous University Air Squadron. Mobilized at the outbreak of war he trained as a bomber pilot, flying with the Whitley-equipped 102 Squadron.

On the night of November 12/13, 1940 his aircraft was hit by anti-aircraft fire over Cologne, igniting a flare in the bomb bay. A fierce fire was put out by the crew and Cheshire managed to bring the crippled bomber and its wounded crew back to base. He was awarded an immediate DSO, a very rare honour for a pilot officer.

On completion of his first tour Cheshire immediately volunteered for a second and flew Halifaxes with 35 Squadron. Utterly fearless he was awarded a DFC and a month later added a Bar to his DSO for ‘”outstanding leadership”.

During a tour as an instructor he managed to fly four more operations, which included the first ‘Thousand Bomber Raids’. In August 1942 he volunteered for a third tour and took command of 76 Squadron, another Halifax unit. Promoted to wing commander he was awarded a second Bar to his DSO. At the age of 25 he was promoted to group captain, the youngest in the RAF.

Unhappy with his role as station commander at Marston Moor, Yorkshire, Cheshire volunteered to drop a rank in order to lead 617 Squadron. He pioneered a new method of target marking, which involved flying at very low level in the face of intense flak.  Finding the Lancaster too heavy for this role, he used a Mosquito and later a Mustang. His first flight in a Mustang was to mark a V-1 flying-bomb storage depot at Siracourt France, which was destroyed by 617 dropping 12,000lb ‘Tallboy’ bombs.

On the night of April 24/25, 1944 he flew a Mosquito to Munich. In the face of withering ground fire, he circled at low level to mark the target accurately.

Having completed 102 operations and four tours he was awarded the Victoria Cross. The citation concluded: “Cheshire displayed the courage and determination of an exceptional leader.”

Cheshire’s VC was one of only two awarded to the RAF for gallantry over a sustained period. (The other was fellow 617 Squadron CO Wg Cdr Guy Gibson.) Many have come to regard Leonard Cheshire as the RAF’s greatest bomber pilot.

Cheshire was one of two British official observers when the second atomic bomb was dropped on Nagasaki, on August 9, 1945. It had a profound effect on the rest of his life.

Having left the RAF during 1946 on medical grounds, in 1948 he started the first Cheshire Foundation Home, which has become a major international charity caring for thousands of physically and mentally challenged people every year.

In 1959 he married Sue Ryder another immensely respected humanitarian. Leonard Cheshire was admitted to the Order of Merit and was made a Peer in January 1991. He died on July 31, 1992.